Home » Certi-Pik, USA Blog » When was the Cotton Gin Invented 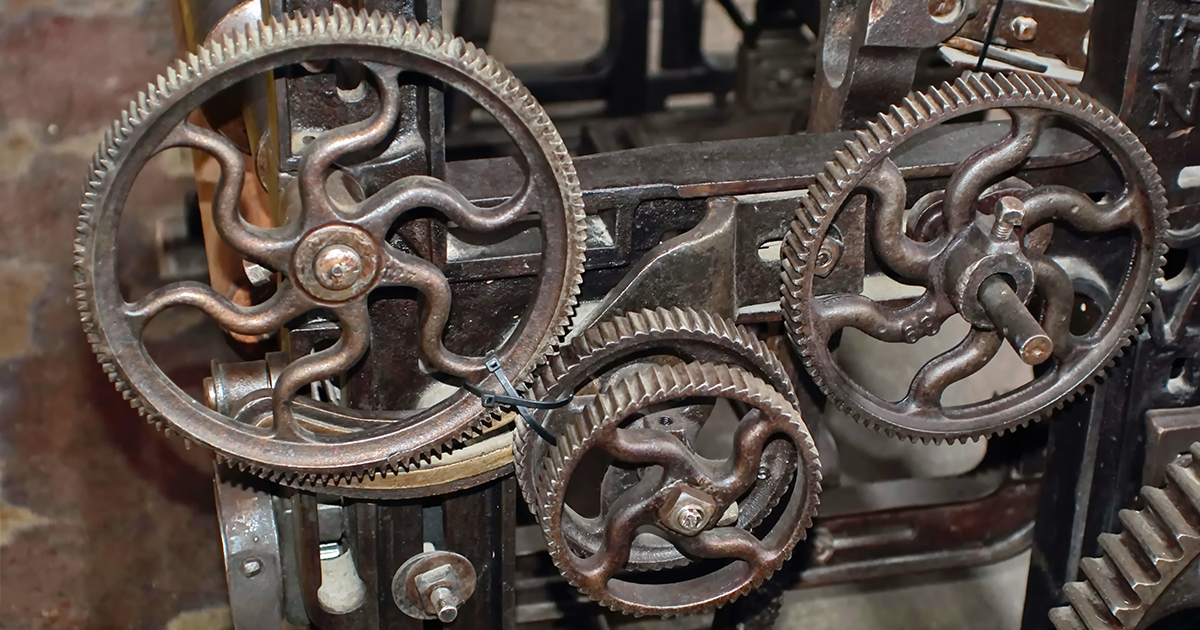 The cotton gin is a machine that was designed to streamline the separation of fibers from their seeds. It enabled higher productivity levels than the manual separation that had been used up until that time.

The effects of this invention extended far beyond the field and into the entire world, with surprising ramifications that still affect us today.

When Was the Cotton Gin Invented?

The earliest version of the cotton gin was a single-roller mechanism that extends as far back as the fifth century in western Indian. These early gins were difficult to use and required a great deal of skill.

The single-roller gins continued to be used for centuries, eventually being replaced by a two-roller version in India and China sometime between the 12th and 14th centuries.

The new and improved two-roller mechanism was known as the “wooden-worm-worked roller,” also called churka or charkha. This two-roller version was in common use throughout the Mediterranean trade by the 16th century, sometimes using water as its source of power. The churka is still used in the subcontinent of India to this day.

The Indian roller mechanism continued to thrive and was brought to the United States in the mid-18th century. It was quickly found to work well for cleaning long-staple varieties but not short-staple varieties, both of which are still grown in the South.

The American inventor Eli Whitney is responsible for inventing the machine that would successfully process short-staple material in 1793. His process, however, damaged extra-long-staple varieties. He was granted a patent for his invention, called the saw gin, the following year.

Cotton could be easily grown, and its fibers could be stored for a long time, unlike food crops. So, in many ways, it was an ideal crop. The challenge came in separating the seeds from the soft fibers. This is not an easy process.

Fibers are produced in the seed pods, or “bolls”, of the plant where the fibers, otherwise known as “lint”, in the bolls are tightly interwoven with seeds. The seeds and fibers must first be separated to make the fibers usable.

Additionally, the short-staple version was more labor-intensive, as it had to be painstakingly hand-cleaned, one plant at a time. The average rate for removing seeds by hand was only about one pound per day.

The long-staple variety was easy to clean but only grew well along coastal areas, so that crop was necessarily limited in scope.

What Does It Do?

The cotton gin, the word “gin” being an abbreviation of “engine”, is a machine that is used to pull fibers from their seeds.

Those fibers can then be processed into various goods, while any undamaged material is used mostly for textiles like clothing.

Whitney’s machine worked like a sieve or strainer. The material was run through a wooden drum, which was embedded with a series of hooks. These hooks caught the fibers and dragged them through a mesh.

The mesh was too fine to let the seeds through, but the hooks pulled the fibers through easily. Smaller gins were cranked by hand. Larger ones were powered by a horse and, later, by a steam engine. Whitney’s hand-cranked machine could remove the seeds from 50 pounds of material in a single day.

The separated seeds can then be used to grow more or to produce cottonseed oil.

Growing a crop was very labor-intensive by itself. Separating the fiber from the cottonseed was even more difficult and time-consuming prior to the invention of the machine. 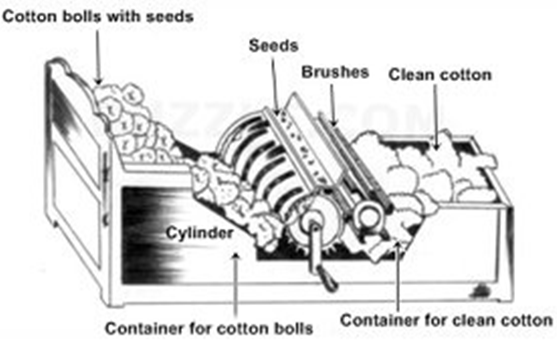 Further improvements and modifications were made to the mechanism over the years.
Fones McCarthy was granted a patent in 1840 for a roller version that was particularly effective at processing long-staple varieties. His mechanism was called a Smooth Cylinder Cotton-gin.
Additional improvements and features included:

Finally, with what has become known as The Munger System Ginning Outfit, or system gin, all the ginning operation machinery was able to be fully integrated. This system ensured that the material would flow through the machines easily while using air to move material from mechanism to mechanism. This resulted in decreased production costs, increased efficiency, and higher quality fiber.

By the 1960s, many other advances had been made in ginning machinery, but the way in which cottonseed flowed through the machinery continued to be based on the Munger system.
Modern automated gins use multiple powered cleaning cylinders and saws and offer far higher productivity than their hand-powered precursors.

When Did it Become Widely Used?

Due to the radically reduced time it now took to separate the seeds from the fiber, Southern planters could increase their crops. As a result, by the mid-19th century, cotton had become America’s leading export.

In fact, it has been estimated that the United States supplied three-quarters of the global supply by 1861. It was now a tremendously profitable crop and made the American South the first global agricultural powerhouse.

How Did it Revolutionize the World?

There is an ongoing debate about the direct effect the mechanism had on slavery. Some of the early Founders believed that slavery would fade away in this country due to social reasons, the end of slave importation by 1808, and the unprofitability of slave-produced crops prior to the invention of Whitney’s machine.

Regardless, it cannot be denied that slavery was a key component of the industry. The material still needed to be picked by hand. This meant that many more workers were needed due to the new and hugely expanded ability to process as much material as could be grown and harvested.

The number of slaves rose proportionately along with the increase in production. There were approximately 700,000 slaves in 1790 and about 3.2 million in 1850. By 1860, black slave labor from the American South provided two-thirds of the world’s supply and up to 80% of the critical British market.

And it had a domino effect. The South continued to develop and depend on its economy from plantation-based agriculture, which encouraged the growth of the textile industry in the North and throughout the world.

Because of all this, the invention has often been cited as one of the indirect causes of the American Civil War.

In addition, the huge increase in the supply of materials created a strong demand for textile machinery and improved machine designs. Metal parts replaced wooden ones, which led to the invention of machine tools in the early 19th century. 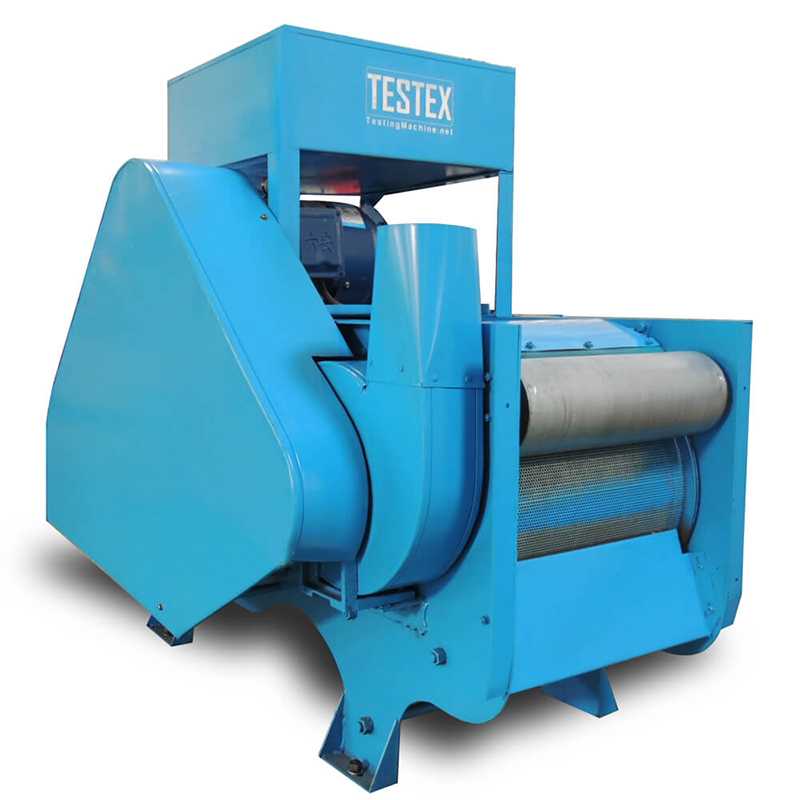 Eli Whitney was able to secure a contract in 1798 from the U.S. government to produce 10,000 muskets in two years. At the time, guns were still being crafted individually, so this was a huge leap.

Whitney promoted the idea of interchangeable parts, a novel idea at the time. He proposed manufacturing and using standardized or identical parts that could be assembled faster. This process would also make it easier to repair machines.

In this way, Whitney was instrumental in developing the American system of mass-production. And we know that mass production was one of the factors that helped usher in the age of the Industrial Revolution.

All this came from a better way to harvest material.

The development of the “gin” or harvester has come a long way.

Certi-Pik, USA has been providing the highest quality cotton harvester parts for today’s harvesters since 1988.

We offer a wide range of replacement parts to cover all your needs. We provide American and international customers with outstanding harvester parts for use with equipment manufactured by the industry’s leading makers of harvesters.

We also sell many specialty items and sheet metal parts to use in rebuilding your harvesting equipment.

As a member of the Better Business Bureau and with nearly a quarter of a century experience, you can be confident in buying from us. Call us at 712-752-8460 or visit us online to shop for your quality replacement parts.